What's the difference between Dementia & Alzheimer's?

If you’re confused about the difference between Dementia and Alzheimer’s then you’re not alone. Google receives thousands of searches each month from people seeking the answer to this question, many of whom have a loved one showing symptoms of memory loss.

So...what is the difference between Dementia & Alzheimer’s?

Dementia is an umbrella term used to describe a set of symptoms, most commonly, memory loss and reduced cognitive function.

Alzheimer’s Disease is a specific type of dementia; 62% of people diagnosed with dementia are given a diagnosis of Alzheimer’s. There are many other types of dementia, including: vascular dementia, frontotemporal dementia and Korsakoff’s dementia. People can have more than just one type of dementia, known as mixed dementia. This is when a person has multiple conditions which could contribute towards the diagnosis. 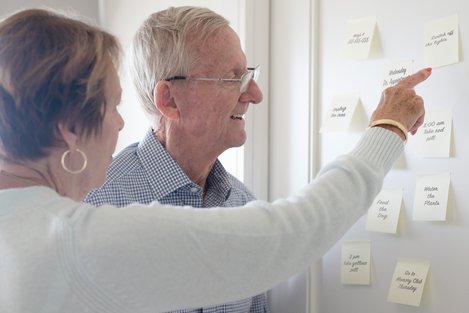 62% of people diagnosed with dementia are given a diagnosis of Alzheimer’s.

What are the symptoms of Dementia?

Early symptoms of Dementia can be easily overlooked due to the fact that they are often only mild. These symptoms can consist of the following:

The forgetfulness and confusion grow as Dementia advances, as well as a person’s ability to take care of themselves. It is not uncommon for a person suffering with Dementia to develop challenging behaviours such as verbal and physical aggression over time.

Are the symptoms of Alzheimer’s any different?

Many of the symptoms of Alzheimer’s Disease coincide with the ones of Dementia which contributes to people’s difficulty in distinguishing between the two.

Common signs of Alzheimer’s Disease include:

Dementia can be reversible, or even temporary in some cases.

Alzheimer’s disease is caused by a particular group of brain cells becoming damaged. The damage to these brain cells occurs years before any of the symptoms develop. Abnormal protein deposits form plaques and tangles in the brain which lead to the connections between brain cells becoming lost and they begin to die.

As you can see from the image to the right, the result of the connections between brain cells being lost and dying cause significant shrinkage of the brain. 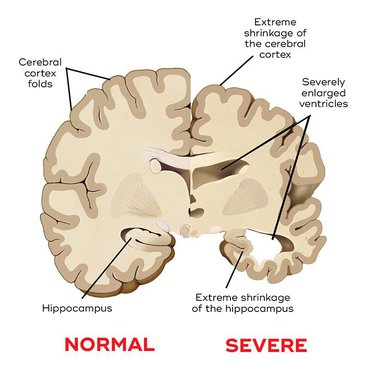 Is it possible for younger people to get Dementia or Alzheimer’s Disease?

As we age, our risk of contracting dementia heightens. However, although not as common, it is still possible for younger people to develop the syndrome. This is known as early-onset dementia.

Symptoms of Alzheimer's disease in most cases begin after a person turns 60 years old. Similarly to dementia, younger people can also develop the disease. For people over the age of 80, the time from diagnosis to death can be as little as 3 years. On the other hand, younger sufferers can live with the disease for a lot longer.

Can anything be done to slow or prevent dementia?

Dementia can be treated by treating the condition that is causing dementia. The treatment depends on the exact cause and type of dementia the individual has. A lot of the treatments for dementia overlap with the ones used for Alzheimer's disease.

Research suggests that oral turmeric supplements may help to prevent dementia & Alzheimer's disease. Curcuminoids help to reduce beta-amyloid plaque buildup on the brain and reduce neuroinflammation, both of which are linked to Alzheimer's development.

Did you know that some forms of dementia are reversible but Alzheimer’s is not?

Dementia can be reversible, or even temporary in some cases but only if the cause was due to drugs, hormone or vitamin imbalances, depression, or alcohol. However, Alzheimers is unfortunately irreversible and permanent at this time.

Get in touch with Trusted Care's specialist Advisors for free, help & support to shortlist services.