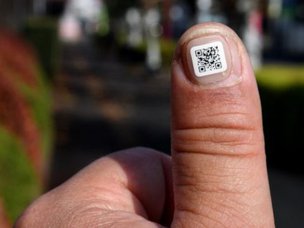 "6 in 10 people living with dementia will wander"

People living with dementia often become confused and disorientated in their surroundings which can cause them to wander and find themselves lost. This can be incredibly dangerous and detrimental to their well-being.

Japan has come up with a way of keeping people living with dementia safe.

Japan has become very aware of the hundreds of elderly people in Japan going missing each year and never returning, so the local government in the city of Matsudo has decided to do something about it with the help of today's advanced technology.

Haruo Hidaka, one of the inventors of the barcodes for people with dementia, was inspired to make a difference after experiencing his own grandmother's health deteriorate due to dementia. He experienced the level of stress carers endure when they have a loved one who is prone to wander and wanted to create something that would alleviate this.

Wearable badges/stickers which display a QR code are being gifted to people who live with dementia and their carers. These QR codes can be read by anybody who has a smartphone. This means that if anyone spots an elderly person who looks lost in Matsudo, they can scan the person's QR code with their smartphone and help the person to safety.  The QR codes can hold information embedded into the unique code such as the person's identification, their local city hall and their telephone number.

QR code stickers are adhesive so they can be worn on clothing items or even bracelets.  Since the QR badge invention, a very small 1cm waterproof sticker has been invented which can be attached to a person's fingernail or toenail. It works no differently to the QR badges but because they are attached to the body rather than clothing, the person with dementia has an additional level of security. Whilst they could wander off without a cardigan, they couldn't wander off without their fingernail! These tiny stickers usually stay on for 2 weeks.

Mrs Itou who has dementia and lives 30 minutes away from Tokyo, Japan, often wanders and has been reported missing a number of times. As a lady who enjoys walking as a hobby, it has been incredibly difficult for her son to locate her whereabouts in the past. The barcode badge that her Mother now has, has successfully helped her back to safety the last couple of times she has gone missing.

Are QR codes demeaning towards people who have dementia?

Some people may argue that tracking people via QR codes isn't morally correct and that it is dehumanising for people with dementia. However, the main aim of the QR codes is to protect them from wandering off and finding themselves in danger. Many organisations, like the Alzheimer's Society, have expressed that they think tagging people who are vulnerable to wandering is a good idea to keep them out of harm's way. The Police in Sussex, UK are also keen to begin using tagging technology as this will reduce the cost of searching for missing people who have dementia.

QR codes make it easier to identify people who appear to be alone and lost and return them to a place of safety such as their own home. When scanned with a mobile phone smartphone, the code will provide details of the person such as their name, and a telephone number which can be dialled to contact the person's relatives or care-givers.

With our forever ageing population, more and more people are being diagnosed with dementia. Could using barcoding technology be the answer to preventing the number of elderly people with dementia going missing?

Would you like help with finding dementia care near you? Please give us a call today